I enjoyed lunch with my brother-in-law at Cow Calf Hay* today. I had the daunting Mad Cow burger: potatoes, pepper jack cheese, chicken, bacon, and burger.

Absolutely delicious. One minor complaint though, and it’s common with burgers at sit-down restaurants: the Bacon Dilemma. 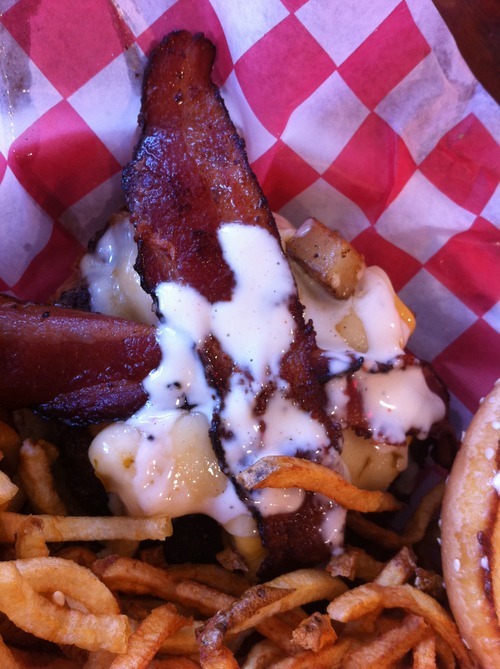 Our server, who seems to be an otherwise reasonable man, suggested it was a feature to have some bites with bacon and some without. I disagree. If I wanted a burger without bacon, I could have ordered it. But why? Bacon is the candy of the meat world. No one wants a bite without meat or lettuce just so they can compare and contrast the different tastes. Who wants a ½ bacon burger?

Regarding the first ‘advantage,’ I hope there’s bacon on the burger. I ordered it that way. They don’t let the cheese hang off an inch all around to make you think you got a good deal. It’s not a bacon bonus (which would be sweet). It’s part of the burger.

And while bacon-only bites are nice, I can order a plate of bacon if that’s what I want.

Fortunately the solution is easy: break the bacon slices in half and arrange them in a delicious overlapping manner across the entirety of the burger, giving delicious bacon flavor to every bite.

It’s just a shame that it has to be done in the first place.

* If you say it fast, it says Cow Cafe which is clever, to be sure. Unfortunately it took me several times of saying it out loud to get it.