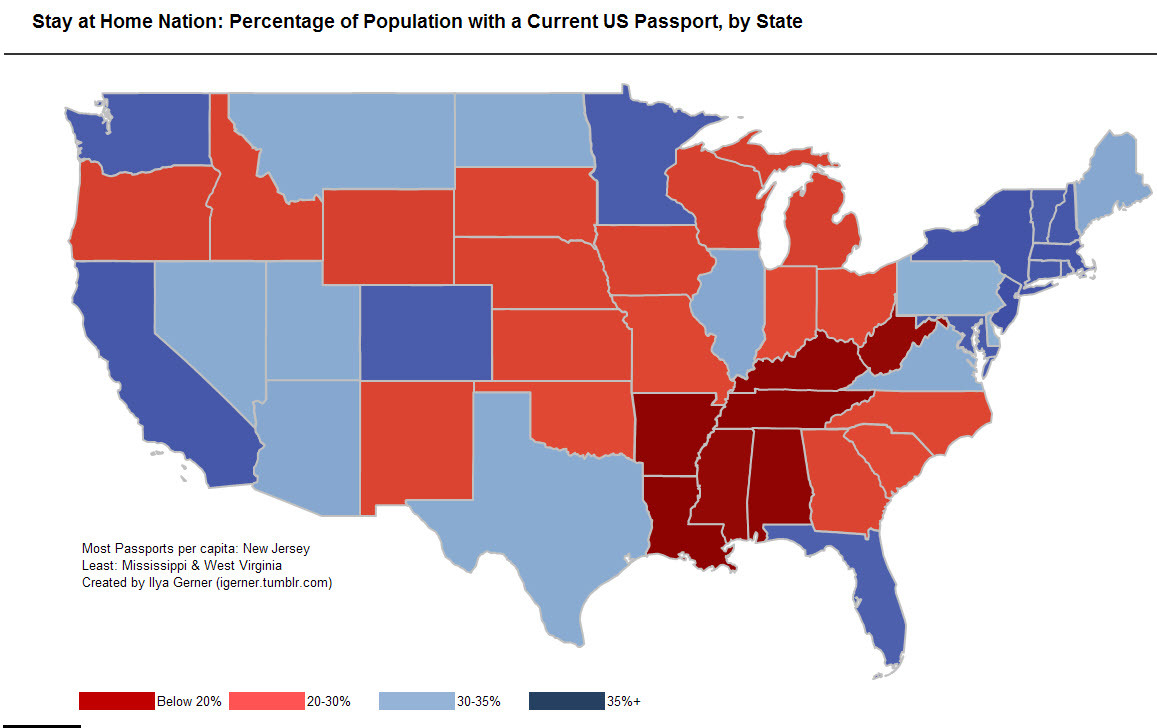 “Travel is fatal to prejudice, bigotry, and narrow-mindedness.” - Mark Twain

Interesting chart of passport ownership by state, especially for one who likes to travel and is married to an über travel agent. The idea of travel is so ingrained in me that I forget what a relative luxury it is. But I know many people in middle age who haven’t traveled on a plane for non-business purposes in decades (or ever). On the flip-side, ours is a country large enough to do plenty of diverse stateside travel. It’s not like you have to have a passport to go to an adjacent state (Europe, Central America, etc).

Unfortunately, this map solidifies some of the stereotypes of certain states in our nation. But a few of the colors are surprising: Oregon, Minnesota, New Hampshire, Vermont, Colorado.

Original blog post material below, noting that that 30% of Americans have a passport.

Planning my vacation made me curious as to how many Americans have valid passports. It’s an interesting question, both for comparative purposes – 75% of UK residents and 60% of Canadians have passports – and because post 9/11, governments have demanded more documentation for international travel. I think of freedom to travel as a basic right, but with regulations tightening, what percentage of Americans are able to leave the country, if only for a brief vacation?

Good data was surprisingly hard to find. A 2008 GAO report puts the number at 28%, but recent media reports have projected an increase to 30% or so.

As with every social statistic applicable to the US there are geographic disparities. I couldn’t find exact figures for states, so I extrapolated zip code-based passport issuance data from the State Department to create a choropleth map of globetrotting & stay-at-home America.

These are very rough calculations, better for comparison than exact figures. There aren’t many surprises. Alaska & Hawaii (not featured on the map because…it’s a long story) weighed in at 44% and 33% respectively, New Jersey was the only state approaching 50%, and West Virginia and Mississippi tied for last place at 13%. Full breakdown here.

To be clear: I don’t think this is evidence of American insularity, ignorance or anything of the kind. Foreign vacations are expensive. Americans don’t have the luxury of a buying a rail ticket bound for any station from Lisbon to Vladivostok, so unless we live in driving distance to Canada (“Like America…but cleaner”) or Mexico, there’s the added flight expense. Nor do we have the kind of vacation time available to most Europeans. Plus, it’s a big and beautiful country; you can spend a lifetime on domestic travel.

Still, for those with the financial means and flexible work schedules there are no good reasons to avoid seeing new things and find new ways of seeing.